Find out more about the REEF Lionfish Research Program.

What's the Problem With Exotic Species?

The threat of exotic species to aquatic environments has gained attention in the media through cases such as the zebra mussel and lamprey in the Great Lakes and Caulerpa taxifolia algae (AKA the killer algae) in California. Incidences of exotic marine fish species have not been widely reported until recently. In recent issues of REEFNotes, we have reported on the Indo-Pacific Batfish that were repeatedly sighted in the Florida Keys and ultimately removed as a result of a team effort between REEF, the Florida Keys National Marine Sanctuary, the New England Aquarium, and local marine life collectors. And now, several news agencies are picking up sightings of lionfish off the Eastern US coast and these populations are reportedly growing.

Recreational divers and snorkelers are a valuable source of information for tracking exotic fish species because they are looking, taking notice of rare things and often know what doesn't belong. REEF is hoping to take a more active role in exotic species and act as a clearinghouse of information. To this end, we are asking our surveying members to report all exotic fish species that they encounter. Sightings data will then be used to track exotic species introductions, document populations that appear to be spreading, and serve as an early warning system to hopefully prevent harmful impacts to the native ecosystem.

What is an Exotic Species?

A manuscript summarizing sightings reported through 2002 to REEF's Exotic Species Sighting Program was published in the journal Marine Ecology Progress Series. The data show a hot-spot of non-native marine fishes along south Florida (Broward and Palm Beach Counties) and the authors believe that intentional (and unintentional) releases from aquaria are the source of these non-natives. Click here to read the paper. Sightings from the REEF Program have been included in the US Geological Survey Nonindigenous Aquatic Species database. Lionfish sightings data, submitted to REEF and collected during REEF lionfish research expeditions, have also been included in a range map generated by the USGS.

How can you help?

If you are conducting a REEF survey and encounter an exotic species, please report the species as a write in species on the back of the scansheet. Whenever possible, please include an extra sheet of paper with extended details about habitat the fish was in, behaviors noted, other species it was hanging out with, and approximate size. Also indicate if you have photo/video of the fish. If you see an exotic fish species when you are not surveying, please use our online sightings form to submit your information. Visit the REEF Exotic Species sightings form to submit your information.

As part of the REEF Invertebrate and Algae Monitoring Programs in the Pacific Region (Pacific Northwest and California), three invasive tunicates and an invasive algae are being monitored. To find out more about the Invasive Tunicate program, visit the PNW Scuba Invasive webpage.

All species below are native to the Indo-West Pacific or Red Sea and have been documented by REEF members in Florida waters. 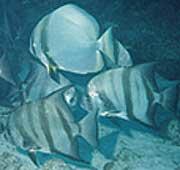 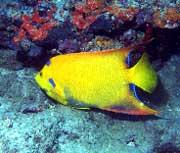 Difference between Zebrasoma desjardinii and Z. veliferum
Z. desjardinii: tail dark, nearly black, often with some spotting; pale lines on dorsal fin form a series of arcs or semi-circles, native to the Indian Ocean.
Z. veliferum: pale gray to light brown to yellow tail; pale lines in dorsal fin DO NOT form a series of arcs or semi-circles, but instead cross to formnet-like pattern, native to the Indo-Pacific