We Need Your Sightings!

Have you seen or captured an exotic or invasive species? Help REEF and USGS track the invasion by submitting a report.

Have you observed native species preying upon lionfish? REEF is creating a database of these observations.

Are you familiar with the Regal Demoiselle? Learn more about the nonnative damselfish and the species' potential invasive threats.

Join this program and host your own successful lionfish derby with our help.

Attend a lionfish workshop and removal dive to learn about the invasion and safe collecting and handling techniques. 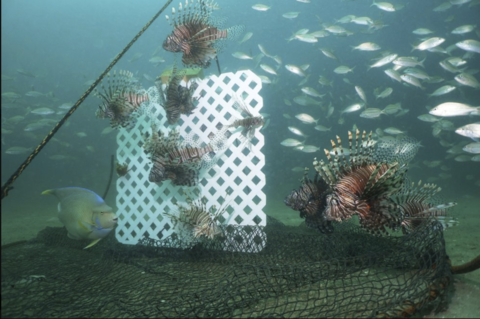 What is the Problem?

The threat of exotic and invasive species to aquatic environments has gained attention in the media through cases such as the zebra mussel and lamprey in the Great Lakes and Caulerpa taxifolia algae (killer algae) in California. Incidences of exotic marine fish species have not been widely reported until the Invasive Indo-Pacific Lionfish (Pterois volitans/miles) with populations now thriving throughout the Tropical Western Atlantic.

Recreational divers and snorkelers are a valuable source of information for tracking exotic fish species because they are looking, taking notice of rare things and often know what doesn't belong. REEF takes an active role acting as a clearinghouse of information. To this end, we are asking our surveying members to report all exotic fish species that they encounter. Sightings data will then be used to track exotic species introductions, document populations that appear to be spreading, and serve as an early warning system to hopefully prevent harmful impacts to the native ecosystem.

What is an Exotic or Invasive Species?

Since 1996, members of REEF have been proactively increasing awareness and engaging in removals of non-native species before they can become established and cause problems in Florida’s coastal waters. Removals in 1999 and 2002 of four Indo-Pacific Batfish (Platax orbicularis) from Molasses Reef in Key Largo set the stage for an invasive species outreach and control campaign, followed by the removal of a Whitetail Dascyllus Damselfish and the Mimic Lemon Peel Surgeonfish from Blue Heron Bridge and a Humpback Grouper from Biscayne National Park in 2012 by a local spearfisher.

Since 1984, 41 species of non-native marine fish have been documented in Florida coastal waters (a hotspot for nonnative species), most believed to be released aquarium pets (Semmens et al. 2004 and Schofield and Akins 2019). Sightings and reports of nonnative species from the REEF Programs are included in the US Geological Survey Nonindigenous Aquatic Species database and are incorporated into the lionfish range map generated by the USGS. USGS, REEF and Frost Science have worked together since 2008 to detect and coordinate rapid removals of non-native marine fishes from Florida waters. Whenever possible the non-native fish are collected alive and displayed at Frost Science Aquaria for an exhibit of exotic marine species including a Blotched Foxface captured from Dania Beach in 2016. Recently, the non-native Regal Demoiselle was added to this non-native marine fish aquarium after one was captured from West Palm Beach by USGS and Frost Science. The species has been recorded in higher abundance in Florida waters and has the potential to become an invasive threat. To learn more, view our webpage on the Regal Demoiselle.

Scientists acknowledge the importance of early detection and rapid response in part because of lessons learned from the lionfish, a destructive marine invader, which was first reported off of South Florida in 1985. It soon invaded the Atlantic coast of the United States, Caribbean and Gulf of Mexico, with unprecedented, alarming speed. “No one saw the lionfish invasion coming, and we definitely don’t want to be surprised like that again,” said USGS Fish Biologist Pam Schofield. “Our research with lionfish shows that it is vitally important to remove non-native marine fishes as soon as we see them – before they have the chance to build up a population and spread like lionfish have done.” Prevention is the best case scenario, but barring that, early detection and rapid response are key to preventing another lionfish-like invasion.

Lionfish Invasion. Why is this an issue?

Known for their show stopping appearance, venomous spines and damage to local reefs, invasive lionfish, are the first non-native marine fish to become established in the Atlantic. Lionfish pose a significant threat to local marine ecosystems due to widespread predation of native species, prolific reproduction and lack of controlling predators. However, early detection and rapid removal can help control their populations and reduce their damage.

Non-native marine fishes can pose a major threat to marine fisheries, habitats, and eco-system function. Increased reports of non-native species and the successful invasion of lionfish in Atlantic waters have proven the need for early warning and rapid response to confirmed sightings. REEF has been working with Federal, State, and local partners as well as divers and dive operators, public aquaria, and foreign fisheries departments to enact rapid response protocol and removals and to assist with scientific investigations related to lionfish and other non-native marine species. have been documented along the entire US East Coast from Florida through Massachusetts, east to Bermuda and south throughout the Caribbean. The expansion has been extremely rapid and exponential in scope.

What is REEF doing about it?

Divers are encouraged to submit any sightings of non-native species via this sightings reporting form. Since 2006, REEF has been working in close partnership with government agencies and partners throughout the region to help develop lionfish response plans, train resource managers and dive operators in effective collecting and handling techniques and conduct cutting edge research to help address the invasion. To aid in this effort, REEF currently enlists interested divers and snorkelers to join organized lionfish research and removal projects and encourages public participation in helping address the invasion and runs lionfish workshops and derbies annually.

In October 2020, REEF was awarded a NOAA's Saltonstall-Kennedy Competitive Grant to study the effectiveness of "Gittings" lionfish traps on deep reefs in the Florida Keys. These innovative, non-containment lionfish traps do not use bait and are designed specifically to attract lionfish, which prefer to live near structure and manmade objects. Traps like these are beneficial because they reduce bycatch and eliminate the risk of abandoned fishing traps, also known as "ghost traps." This project will build upon previous experience from several organizations and individuals, including FWC and Dr. Steve Gittings of NOAA, who originally designed the traps. We will also utilize the expertise of the Florida Keys lobster fishing community to improve trap design and catch rates. Ultimately, the goal of the project is to determine whether these lionfish traps are an effective and viable fishing method to target lionfish populations in deep water. Widespread lionfish trap use may significantly reduce the impacts of lionfish on deep water habitats that are not able to be accessed by recreational divers.

How you can help: