Our staff members represent a wide array of backgrounds and experiences, but we all share a passion for ocean conservation, education, and citizen science. Learn more about us below.

Martha Klitzkie is REEF's Co-Executive Director: Strategy & Operations. Martha’s passion for teaching people about the marine environment grew over ten years of leading residential science programs in California and Florida. Now a resident of Chicago, she focuses that passion on connecting people with the marine environment, and building a sense of community amongst ocean enthusiasts, regardless of their proximity to the coast. Martha graduated from Warren Wilson College in Asheville, North Carolina, with a degree in Environmental Education, then went on to complete her Masters in Educational Leadership and Administration at Argosy University in San Francisco. Martha joined the REEF team in 2011 and has been loving it ever since! She enjoys the diversity of tasks and seeing firsthand how small individual actions make big impacts. Like how a single fish survey, adds up to the world’s largest marine sighting database. Or how one education program can change the career path and worldview of a participant. She believes it’s the little things that change the world. Her executive leadership role centers on expanding REEF’s impact and capacity to support healthy oceans. She directly supervises the Explores Education Program and operations of the REEF Campus in Key Largo, Florida. Her role is intersectional across REEF’s programs, developing communication strategies and plans for long-term growth.  In the day to day, she oversees the administration and business functions that help our members, volunteers, partners, and staff thrive.

Christy Pattengill-Semmens, Ph.D. is REEF's Co-Executive Director: Science & Engagement. Christy started working with REEF as a Nature Conservancy intern during the early days of the organization in Key Largo in 1993, and officially joined REEF staff in 1998. Christy attended University of Southern California, where she earned her Bachelor of Science in Marine Sciences. She then conducted her dissertation research on fish assemblages at the Flower Garden Banks National Marine Sanctuary in the Gulf of Mexico, and received her Ph.D. from Texas A&M University. She is based in San Diego, CA, where she also serves as a Visiting Scholar at Scripps Institution of Oceanography. Christy’s role at REEF intersects citizen science, education, and conservation, engaging REEF’s members to advance the organization’s mission of protecting biodiversity and ocean life. She oversees all aspects of the Volunteer Fish Survey Project, facilitates the incorporation of REEF’s citizen science data into resource management policy and the scientific literature, manages the REEF.org website, and regularly leads expeditions as part of REEF’s Field Survey Trips program. She has directed REEF's survey project expansion through the years, moving the project from its roots in the tropical western Atlantic to tropical and temperate oceans world-wide. Christy regularly advises on developing scalable citizen science programs, and has worked with the South Atlantic Fisheries Management Council citizen science framework, Cornell Lab of Ornithology, the Government of the Azores, among others. In her executive leadership role, Christy provides strategy to support donor development, member cultivation, and long-term strategic planning. Christy and her husband, Brice Semmens, Ph.D., are the lead scientists for REEF’s Grouper Moon Project, studying one of the last and largest known spawning aggregations of the endangered Nassau Grouper. For their work on this project, Christy and Brice were named Sea Heroes by Scuba Diving Magazine in 2019. In 2021, Christy was inducted in to the Women Divers Hall of Fame (WDHOF). She currently serves as a Board of Trustee member for both WDHOF and the Gulf and Caribbean Fisheries Institute (GCFI).

Alli Candelmo, Ph.D. is REEF’s Conservation Science Manager. Alli joined the REEF team in 2018 and brings a wealth of experience to the organization. She attended Rutgers University where she obtained a Ph.D. in Ecology and Evolution. She has studied the population dynamics and management strategies of invasive lionfish in the Cayman Islands and Turks and Caicos, working with the local stakeholders and communities on both islands to help improve removal efforts and gain a better understanding of invasive lionfish. Her doctoral and postdoctoral research has examined a number of anthropogenic impacts on coastal ecosystems and early life history finfish, including; toxicants, ocean acidification and increased temperatures. She had the opportunity to collaborate with REEF on the Grouper Moon project in 2016 and 2017 examining survivorship of early life stages of Nassau and Tiger Grouper. She also has experience developing hands-on science activities. She is a strong advocate for conservation of coastal and marine ecosystems, regularly volunteering for local community programs.

David Ehlert is REEF’s Campus Coordinator He attended the University of Kentucky and graduated in the spring of 2019 with a Bachelor of Science in Natural Resources and Environmental Science with a focus in Wildlife Biology. David first came to REEF in the summer of 2018 as a Marine Conservation Intern. After graduating college, David returned for the summer of 2019 as the Lead Intern for the Education and Outreach Program. Before coming to REEF, he spent time working with Price Labs in Lexington, Okra Abby in New Orleans, and Camp Burnamwood in Irvine. David was ecstatic to return to REEF as a staff member in November 2019. REEF’s Campus Coordinator position allows David to share his experience and passion for marine conservation with REEF’s Marine Conservation Interns, designing a program that introduces interns to the vast field of marine conservation. He is excited to bring his experience mentoring others to the Marine Conservation Internship Program, and his outgoing personality to REEF.

Stacey Henderson is REEF’s Program Services Coordinator. He grew up in a small town in Vermont and graduated from Wheaton College in Massachusetts in 2015 earning a BA in Biology. Stacey first joined REEF as a Marine Conservation Intern in the summer of 2019 and stayed on after as the Volunteer Fish Survey Project Lead Intern. Stacey was very excited to become part of the staff team in April of 2020. Before joining REEF, Stacey worked as a PADI dive instructor in Honduras and in the Central Indo Pacific. He taught his students the importance of marine conservation while introducing them to the underwater world. He now works in support of REEF’s surveyors, donors, members, and the general public through management of business operation and support of marine conservation programming. He is enthusiastic about REEF and the future of its programs! He is an avid diver, surveyor, and underwater photographer.

Amy Lee is REEF’s Engagement and Communications Manager. She oversees REEF’s Field Survey Trips Program and leads communication and outreach efforts. Her role serves as a link between REEF programs, surveyors, donors, members, and the general public. She works closely with REEF’s staff team and Directors to develop strategies for continued growth while creating content to facilitate engagement. An avid fish surveyor, Amy also teaches Fishinars and leads REEF Field Survey Trips. She is a proud alumna of the University of South Carolina, where she earned two degrees, a B.A. in Public Relations and a B.S. in Marine Science. She got her start with REEF as a Marine Conservation Intern during the fall of 2014, and joined the staff in April 2015. In 2019 she received the Wave Makers Award from the Dive Equipment and Marketing Association (DEMA). Outside of REEF, Amy is a contributing writer for Alert Diver magazine, published by Divers Alert Network. In her spare time she enjoys diving, reading, and being with her dog, Pinecone.

Madalyn Mussey is REEF’s Education and Outreach Program Manager. More commonly known as "Moose" around the office, she is originally from Wisconsin but attended the University of Missouri in Columbia, MO. Madalyn graduated in December 2018 with a Bachelor of Science in Parks, Recreation, and Tourism and an emphasis area in Natural Resource Recreation Management. She first came to REEF in the spring of 2019 as a Marine Conservation Intern. Following her internship, she quickly transitioned into the Lead Intern for the Invasive Species Program. Having spent most of her time outside of classes as a conservation educator before coming to Key Largo, Madalyn was thrilled to join the REEF staff in November 2019. She has had many opportunities to share her interest in conservation through education at SeaWorld Orlando, the Conservancy of Southwest Florida, and the University of Missouri Adventure Club. Managing REEF’s Education and Outreach Programs allows Madalyn to apply her dedication and experience in hands-on conservation education. She can give those around her an appreciation for the natural world and instill a long-lasting devotion towards marine conservation.

Janna Nichols is REEF's Citizen Science Program Manager, working extensively with the Volunteer Fish Survey Project database, training programs, and volunteer teams. She coordinates REEF's social media and was also the creator of the popular REEF Fishinar (webinar) program. Although Janna officially joined REEF staff in 2010, she has been conducting surveys, teaching Fish ID classes and giving REEF presentations as a volunteer since 2000, and is based in Vancouver, Washington. Janna loves underwater photography and marine life identification, and many of her photos appear in west coast marine life ID guides, publications, and online resources. Her efforts were integral to the design and photography on REEF's many laminated fish identification cards. She has personally completed over 1000 REEF surveys and is an expert level REEF surveyor in the Pacific Coast, Hawaii, Northeast US and Canada, and Tropical Western Atlantic regions. Janna is a PADI certified SCUBA instructor (retired), a past AAUS Scientific Diver and Dive Safety Officer, and the leader of REEF's Pacific Coast Advanced Assessment Team. In 2003, she received REEF's Volunteer of the Year award, in 2013 she received Dive News Network's Diver of the Year Award, and in 2015 she received the Golden Hamlet award from REEF.

Hilary Penner is REEF's Education and Conservation Programs Manager. She works to develop new community partnerships, create new youth learning opportunities, and engage REEF members to support REEF’s ocean conservation mission. Hilary joined the staff in 2021 but had previously been involved with REEF for over two decades as a volunteer. Her first REEF Field Survey Trip was to Bimini in 1996 and she has been engaged with REEF ever since. A previous South Florida resident, she worked at Gumbo Limbo Nature Center in Boca Raton, Florida with sea turtles and volunteered at REEF HQ in its early days. When she moved to Colorado to be closer to family, she started an inland ocean education business. Before joining REEF staff, she taught middle school science for 7 years and has a M.ED in Environmental Education. She lives in the mountains south of Denver with her husband and two daughters. Her favorite fish is the cherubfish. 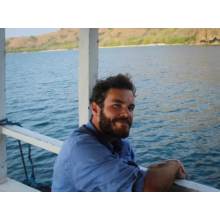 Dan Greenberg, Ph.D. is REEF's Research Associate. Dan started work with REEF in 2021 to leverage REEF’s extensive Volunteer Fish Survey Data dataset to estimate population trajectories and spatiotemporal trends in abundance for various fish and invertebrate species with available data. Prior to joining the REEF team, Dan was a Postdoctoral Fellow at Scripps Oceanography. His research focuses on understanding how contemporary biodiversity is poised to change in human-dominated ecosystems, and how species' evolutionary histories contribute to their present fate in this world. He has been involved in a variety of research projects across taxa and ecosystems, ranging from climate change ecophysiology in amphibians to leading biodiversity surveys in the relict church forests of Ethiopia. In his work with REEF, he's exploring how the Volunteer Fish Survey Project can fill in crucial data gaps for biodiversity science and applied ecology in the Salish Sea, Caribbean and beyond. Before turning his focus to fishes, his research focused on terrestrial systems and specifically amphibians. Originally from Ontario, he completed his undergraduate degree in wildlife biology at the University of Guelph and his PhD at Simon Fraser University.