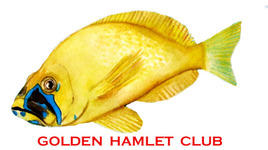 While each and every one of REEF's 16,000+ volunteers who have conducted a survey as part of the Volunteer Fish Survey Project are participating in diving that counts, there is a small group of surveyors who have taken their passion for fish and critter watching to the next level.

REEF's Golden Hamlet Club is a highly dedicated group of surveyors who have conducted 1,000+ surveys! To commemorate this significant benchmark, Golden Hamlet Club members’ names are engraved on a plaque displayed at REEF Headquarters in Key Largo. Click on the names below to learn more about each member of the Golden Hamlet Club.

The very first Golden Hamlet was awarded to Linda Baker after she conducted her 1,000th survey at Something Special on Bonaire on 12/20/2004.

To view those who have achieved our Juvenile Hamlet award (500 surveys) please go here.

These REEF surveyors have not only achieved Golden Hamlet status, they have surpassed the 1,000 survey benchmark more than once!

Members are shown from most recent to earliest recipients.