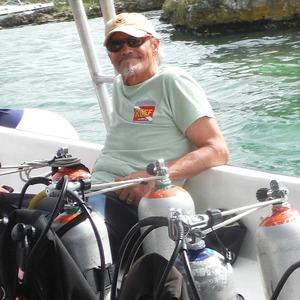 My first REEF Survey was in Bimini on October 27, 1996. It was a REEF Field Survey trip my daughter Hilary had signed up for to receive college credit. I went, even though I wasn’t interested in “fish counting”, it was to spend time together and scuba dive. That was 17 years ago and I still remember so many parts of that trip clearly. Ned showed me a secretary blenny and I thought “Are you kidding me? Such a small fish is worth looking at?” That was then.

Most of my surveys are in the Caribbean, I have also been to the Sea of Cortez, Fiji, and Hawaii. In 2014 I will be adding Costa Rica to my list.

The sailfin blenny, not because of its coloring but because of its behavior! They are a cryptic fish about 2 ½” long that takes a bit of effort to find. When you do spot them and if you are a bit lucky you will see them in the water column about 3’ off the bottom clapping their pectoral fins and flashing the long dorsal fin. This is a great sight see and to be able to watch fish behavior like this is one of the reasons to survey.

Being a volunteer has given me the opportunity to see firsthand and learn many fantastic facts about the sea and the creatures living there.  REEF has brought me to places I never imagined I would go, and shown me sights I thought were unbelievable.

Another memory with REEF is going to Little Cayman and helping with the Grouper Moon Project. The thing that I will never forget is seeing 4000 Nassau groupers swimming along a ledge on Little Cayman at 90’ getting ready to spawn.  They had taken on this different color pattern.

Plus I have been able to meet many other REEFER fish geeks whom will be friends for life.

On May 19, 2013 at 2:20PM with a giant slate clipped to my BCD, I did a backward roll into the waters off Fiji.  My 1000th REEF underwater survey, I had heard of other people getting to 1000, but for many years I did not think it would be me, but a couple of years ago I saw it as a near possibility, and dove, dove, dove. On that memorable dive I saw 122 species of fish, of which the redtooth triggerfish stands out because of its red teeth.  Before jumping in we took pictures of REEFERS I had known for 15 years and some only met a few days ago. 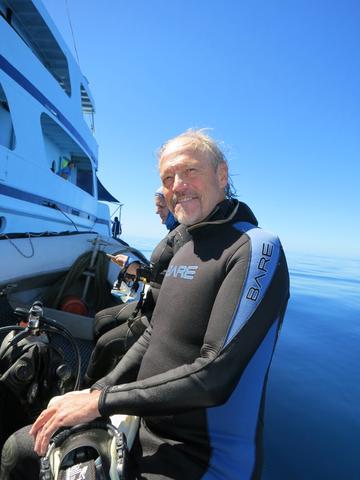 The surveys that are turned in are current data for the scientific community to use.  I have become part of citizen’s science and by doing this, I am giving back to mother earth.  I have seen the little ½” blennys, snorkeled with a whale shark the largest fish species in the ocean.  I have found fish hiding and observed fish showing off, some going fast some going slow.  All together I have seen 1120 different species of fish!