My wife Cassandra (also an active REEF member) wasn’t diving when I had my first encounter with a REEFer. We were on Bermuda in 2000 with several friends. I was the only diver, so I buddied with strangers on the dive boat. On the second or third day, a woman came aboard who was doing surveys. Between dives I asked her about what she was doing, and she invited me to buddy with her. That woman was Judie Clee, long time REEF member and REEF's Volunteer of the Year in 2005. Judie told me about REEF and the website, so when we returned home, I joined. The following year we signed up to be with Paul Humann on Bonaire for his first “Discovery” trip. We did that because it was advertised for inexperienced fish and critter watchers. After doing those first surveys, I was hooked. I have been on over a dozen Field Survey Trips and/or AAT projects, in locations from the Florida Keys and the Biscayne National Park to Barbados. I really like diving with other REEF members. They are very friendly, and we share a common interest. The excitement level on the boat after a dive can be very high as the previous dive and the sightings are discussed.

I completed my 1000th survey early in 2010. I was officially welcomed into the Golden Hamlet Club in August of 2013 at the 20th anniversary celebration of REEF. 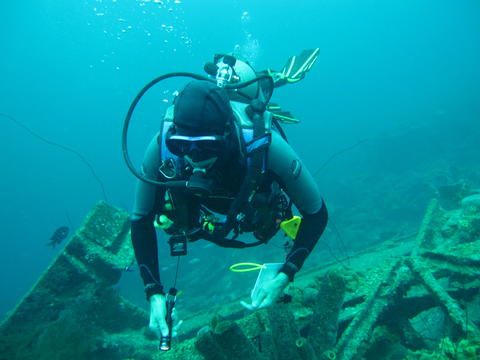 Do you dive close to where you live, and if so, what is the best part about diving there? If you don’t dive nearby, where do you most often dive? Where is your favorite place to dive and why?

We retired in 2006, and moved from Long Island New York to Michigan and Bonaire. We own a condo at Sand Dollar on Bari Reef, the #1 site for species diversity in the Tropical Western Atlantic. That is also the year that Cassandra started diving. With Bari in our front yard, Cassandra now has over 950 dives. Bonaire is wonderful because of the shore diving. You don’t need a boat … just a “dive truck.” Starting and ending a dive in one foot of water allows for many more habitats to explore with a greater variety of species. To prove my point, go to the ReefNet Reef Fish ID DVD and look at the video for the nineline goby.

My favorite is the next one to be added to my "life list".

Everyone loves the queen angelfish because of its beauty. I think the male rainbow wrasse is equally beautiful. I love the combination of colors and patterns on the redspotted hawkfish. Several years ago, Cassandra discovered a redface moray eel (also known as the orange moray) just a ten minute swim from our dock. We have now seen almost 20 of these rare fish (Check them out in the REEF database if you doubt my use of the term “rare.”). Cassandra has a photo of a redface sharing the same hole as a chestnut moray. It is wonderful. I use it as my computer wallpaper. 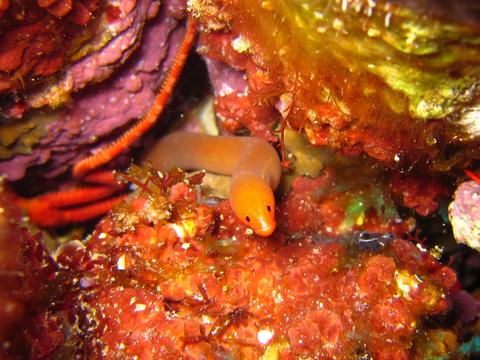 I really enjoy the REEF trips where I get to dive with others who value the ocean and get excited by the fish and their behaviors.

On Bonaire you shore dive, so you are seeing fish from the second you walk into the water until you walk out an hour later. The result is you cover several habitats and see different fish than on a square profile boat dive.

Two other places that should be on a "must survey"  list would be St. Vincent and Utila. Dive St Vincent has dive guides who will show you fish like pipefish, snakefish, black brotula, twin horned blenny, yellow cheek basslet, snake eels, redspine blenny, plus many other unusual fish.

The July 2013 REEF trip to Utila was my first trip to the Central American coast, so there were many fish that I got to add to my life list. They included quillfin blenny, filament blenny, large eye toadfish, yellow jawfish, shortnose batfish, red cheek goby, and ribbon blenny. 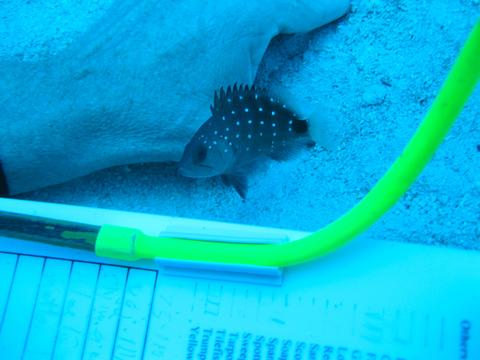 A cute little Snowy Grouper that Franklin found while diving with Ned DeLoach in Bonaire.