In an ongoing collaborative conservation program called the ‘Grouper Moon Project’ with the Reef Environmental and Education Foundation (www.REEF.org), the Cayman Islands Department of the Environment has expanded the Nassau grouper monitoring to Grand Cayman. The collaboration started in 2002, following two consecutive years of heavy fishing and imminent collapse of what was thought to be the Cayman Islands remaining viable spawning aggregation of Nassau grouper, located at the west end of Little Cayman. Since 2004, a seasonal ban on fishing in all designated grouper spawning areas in the Cayman Islands has been in effect during spawning season. The Nassau grouper (Epinephelus striatus) is an ecological and economic corner stone of Caribbean coral reefs.

The project, started in Little Cayman, and then the Brac, was expanded last year to include Grand Cayman. The Department of the Environment, who is responsible for the on-site work in tagging and monitoring a number of Nassau groupers, noted that the fish were aggregating and spawning at depths of 130 – 200 feet. This limited the time and work that researchers could safely and effectively complete in the 2-week spawning cycle.

To alleviate the constraints of diving deep depths on regular scuba, several other sponsors came on board to assist in the project, including Divetech and PM Gas of Grand Cayman, Silent Diving of Brockville, Ontario and Shearwater Research of Vancouver, British Columbia.

“The goal was to get DOE staff diving with closed circuit re-breathers (CCR), which by their nature allow divers to explore deeper depths with a constant partial pressure of oxygen, thereby giving them more dive time in a safe manner and extending the expedition time for greater project benefit” stated Nancy Easterbrook of Divetech. We contacted several of our partners and suppliers and were successful at getting the DOE some expensive equipment as a donation to the project. Having watched Dr. Brice Semmens fascinating presentation several times, we recognized the value of the data being collected for the sustainability of the Groupers for future generations.”

Bruce and Lynn Partridge commented "Shearwater Research Inc. is pleased to offer our support to the Cayman Department of the Environment and the Grouper Moon Project (REEF). We applaud the efforts of those involved with the catch, tag and release of Cayman’s endangered Groupers. As divers, we all appreciate a healthy fish population. The success of this program will also contribute greatly towards a establishing a sustainable fishery in the area."

Silent Diving is the distributor of the Inspiration and Evolution rebreathers. The rebreathers are well tested both in the field and through extensive CE testing in the UK before release. “We receive a lot of requests for participation in various projects – from filming to research and expeditions. The Grouper Moon project made sense to us as divers, as it is paramount to manage our marine fisheries in a responsible manner, and this takes knowledge. It was an easy decision to support this worthwhile project as we are also frequent visitors to Cayman”, stated Mike Fowler of Silent Diving.

Nassau grouper, normally solitary and territorial, travel during the winter full moons, sometimes over great distances, and “group” together to spawn. About fifty of these spawning aggregations sites have been recorded in different places throughout the Caribbean. Historically, once discovered, grouper aggregation sites have become synonymous with fisherman aggregation sites. Due to the timing and site fidelity of the spawning aggregations and the ease with which these relative loners can be caught while congregating by the hundreds and thousands to spawn, one-third to one-half of the known Caribbean aggregation sites are now inactive. The Cayman Islands used to be home to five Nassau grouper (Epinephelus striatus) spawning sites. Today, four of these sites are dormant or depleted. But one site, on the west end of Little Cayman Island, is home to one of the last great reproductive populations of this endangered species.

Nassau grouper populations seem to be particularly vulnerable to over-fishing, as perpetuation of the species depends solely on high numbers of older individuals needed to form viable spawning aggregations. These aggregations represent 100% of the species reproductive output, and form annually at historically well known locations during a very predictable and short period of time. The research being conducted will assist in preserving the groupers for both fishermen and divers to enjoy for generations to come by identifying the level and extent to which these very sensitive (and increasingly rare) spawning aggregations must be protected.

REEF and The Department of Environment wishes to especially thank Nancy Easterbrook of Divetech for being instrumental in securing the donation of the deep diving equipment that will greatly facilitate this goal. 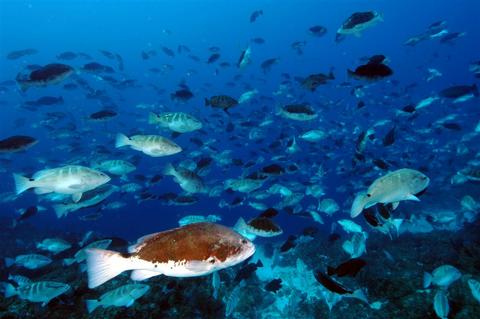