Baby Grouper Adrift! shows the results of state-of-the-art satellite drifter research being conducted as part of the Grouper Moon Project, a collaborative research effort between REEF and the Cayman Islands Department of the Environment. Working with scientists from Oregon State University, the Adrift project aims to better understand where endangered Nassau grouper larvae end up after being spawned.

Pick a point on the map that would be the worst imaginable place to go swimming or scuba dive - cold and deep, with big waves meshing over the confluence of strong currents. That's most often where grouper go to spawn on winter nights. Why there? What is the importance of such places? For a long time, scientists thought fish spawned at these sites to spread larvae all over. Recent evidence, however, suggests that fish spawn at these sites, and at certain times of the day and tide cycle, in order to keep larvae close to home. Now, through the Grouper Moon Project research efforts, visitors to the Adrift website can follow the larvae in real time as they complete a 45-day ocean journey, and with any luck, make it to coastal areas to settle and grow.

In 2011, researchers released satellite-linked drifter buoys to track eggs released at a Nassau grouper spawning site on Little Cayman Island. The Adrift webpage features a map that continually updates the location of these drifters as they complete a 45-day path tracking the potential route grouper larvae take as the grow large enough to settle on the reef. The website encourages visitors to submit a guess where they think the drifters will end up – cool REEF prizes will be awarded. The Disney Worldwide Conservation Fund provided funding support for the Adrift webpage.

The primary objective of the Grouper Moon Project is to evaluate the importance of Nassau grouper spawning aggregations to local fisheries and coral reef ecosystems. Little Cayman Island in the Cayman Islands is home to one of the last known, and largest, spawning aggregations of the endangered Nassau grouper. For ten days following winter full moons, thousands of large grouper meet at known reef sites for short periods of time (days to weeks) and release their gametes in massive spawning bursts. Since 2002, REEF has coordinated annual efforts to monitor and study the Little Cayman Nassau grouper aggregation. The project has grown in scope to include an ambitious acoustic tagging research project, juvenile habitat and genetics studies, and oceanographic connectivity research. For more information on the Grouper Moon Project, visit http://www.REEF.org/programs/grouper_moon 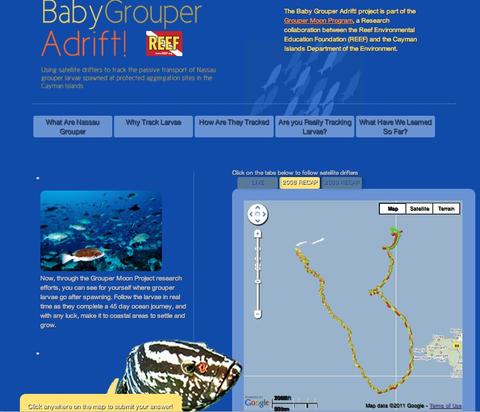