At the break of dawn on July 19th, 56 ardent lionfish hunters set out to compete in the Third Annual Teeples Memorial Fort Lauderdale Lionfish Derby. The weather conditions were ideal, helping to make this derby one of the best yet. Vying for more than $3,500 in cash prizes, 14 participating teams brought in 557 lionfish to the 15th Street Fisheries dock during this sunrise to 5:00 pm event. This year’s catch broke the record for this tournament by a substantial 138 lionfish. Team Spearfishin’ Critical took 1st place for most lionfish with an impressive 140 lionfish. Team GOLET finished 2nd with 72 lionfish and Zen Killers 3rd with 62 fish. Awards were also given for 1st through 3rd place for the largest and smallest lionfish caught. Team Pain Killer brought in the largest fish, measuring in at a whopping 430 mm, as well as the smallest fish (135 mm).  Team Sea Experience and Spearfishin’ Critical took 2nd and 3rd place for largest fish with 420 mm and 416 mm fish respectively. All three of these largest fish broke the old 2012 tournament record of 411 mm.  The annual derby is hosted in honor of the late Billy Teeples, a passionate diver and angler committed to marine conservation. 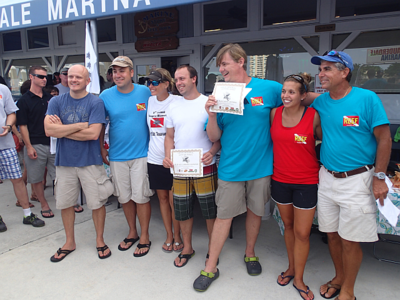 This year’s derby was made possible through major sponsorship by 15th Street Fisheries, JLPN, Florida Fish and Wildlife Conservation Commission, Zookeeper, Diver’s Direct, and Norman’s Cay restaurant as well as numerous local business and public donations. Delicious samples of lionfish ceviche were given out to the public.

Lionfish, native to the Indo-Pacific region, are an invasive species in the Tropical Western Atlantic and are causing significant negative impacts to native marine life throughout the region.  According to Dr. Stephanie Green, Oregon State University researcher, some sites in the Bahamas have seen 65-95% declines in native fish in a two year period.  Impacts to valuable food fish like grouper and snapper could cause damage to the economy and ecology of countries in the invaded range.  Regular removals and removal events are showing promise however, in reducing local lionfish populations and sizes.  Using scientific models, it is estimated that the 557 lionfish caught in this year’s Teeples Memorial Derby would have consumed between 1.3 million and 5.8 million prey fish in the following year had they not been removed. 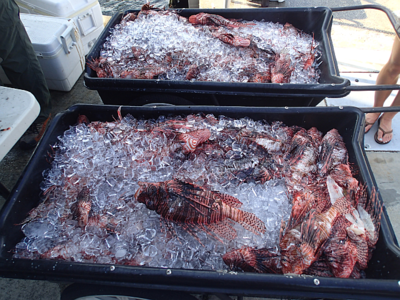 For complete derby results and information on additional lionfish derbies throughout the region, visit www.REEF.org/lionfish/derbies