On December 14th, 2014, REEF staff and volunteers recorded the third successful pre-emptive removal of a non-native fish in south Florida coastal waters when they removed a mimic lemon peel surgeonfish (Acanthurus pyroferus) from waters under the Blue Heron Bridge in Palm Beach County.

Since 1996, members of the marine conservation non-profit Reef Environmental Education Foundation (REEF) have been proactively increasing awareness and engaging in removals of non-native species before they can become established and cause problems in Florida’s coastal waters.  Removals in 1999 and 2002 of four large Indo-Pacific batfish (Platax orbicularis) from Molasses Reef in Key Largo set the stage for an invasive species outreach and control campaign, followed by the removal of a whitetail dascyllus damselfish (Dascyllus aruanus) from the east side of the Blue Heron Bridge in 2009. The latest removal of the mimic lemon peel surgeonfish, the first record of this fish in Florida waters, occurred on the west end of the bridge.  A humpback grouper (Chromileptes altivelis) was also removed by a local spearfisherman from a reef off Biscayne National Park in 2012. 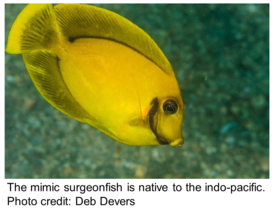 More than 30 species of non-native marine fish have been documented in Florida coastal waters (Schofield et al 2009), most believed to be released aquarium pets. Invasive lionfish, first sighted in Florida in 1985, are the only one of these species to have become established and are now causing severe problems throughout the western Atlantic, Caribbean and Gulf of Mexico.  “Prevention is the best case scenario” says REEF’s Director of Special Projects, Lad Akins, “but barring that, early detection and rapid response are key to preventing another lionfish-like invasion”.

Akins, who has been involved in all of the previous pre-emptive removals heads the organization’s exotic species programs and sits on the Gulf and South Atlantic Aquatic Invasive Species Panel. “Once a species becomes established and is reproducing, it is almost impossible to control.  A penny of prevention is worth millions of dollars in dealing with invasions once they gain a foothold.”

The latest removal at the Blue Heron Bridge started with a sighting and reporting of the suspect fish by two REEF volunteer divers, Deb Devers and Lureen Ferretti on Thanksgiving weekend.  Devers subsequently verified the continued presence of the fish on December 13th and the removal effort was undertaken by Devers and Akins.  The surgeonfish, measuring just over 4 inches, was captured live and shipped to the Ripley’s Aquarium of Canada where it will go on exhibit for public display.  The exhibit will include signage detailing the origins of this fish and the dangers of invasive species.  Andy Dehart, Director of Husbandry at Ripley’s Aquarium of Canada and a member of the Board of Trustees of REEF is an advocate of the collecting program.  “The ability to display these non-native species within the aquarium community allows millions of people each year to learn about the dangers of releasing their pet fish.  As many aquarium hobbyists frequent public aquariums it is an effective way to get the word out.”   Previous collections were also placed on display at public aquariums including the Florida Aquarium, the New England Aquarium and the National Aquarium in Baltimore. 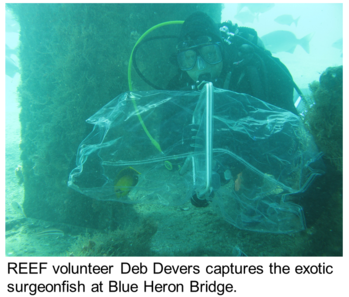 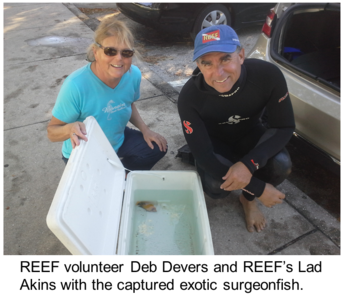 Kristen Sommers, who oversees the Florida Fish and Wildlife Conservation Commission’s exotic fish and wildlife program,  lauded the removal effort adding, “We hope that pet owners around the state understand that releasing their unwanted pets is not only bad for the environment and these animals, but it is also illegal. We encourage owners needing to find homes for their fish, snakes, birds and other non-native animals to call the FWC’s Exotic Species Hotline at 1-888-IveGot1 for assistance.”