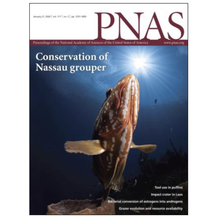 January 2020 - Scientific paper from the Grouper Moon team that documents a successful recovery of Nassau Grouper populations in the Cayman Islands. It also highlights the value of collaborative efforts for conservation success. The study, published in Proceedings of the National Academy of Sciences, is available here. Read more here. All publications from the project are listed below.

September 2019 - "Grouper Moon The Next Phase", a Dr. Guy Harvey Expedition, presents the latest efforts by REEF, the Cayman Department of Environment, and research partners to study and protect the iconic Nassau Grouper. Click here to watch.

Other Resources, Articles, and Videos

What are Nassau Grouper? 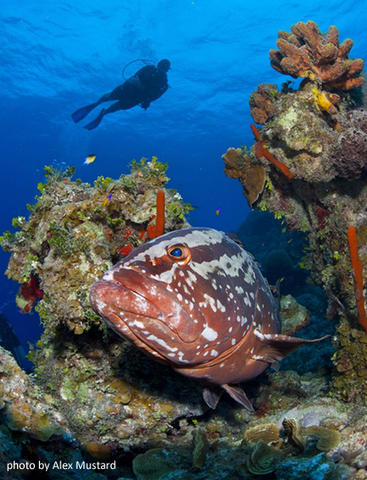 Normally solitary and territorial, during the winter full moons grouper travel, sometimes over great distances, and “group” together to spawn. About fifty of these spawning aggregations sites have been recorded in different places throughout the Caribbean. Historically, once discovered, grouper aggregation sites have become synonymous with fisherman aggregation sites. Due to the timing and site fidelity of the spawning aggregations and the ease with which these relative loners can be caught while congregating by the hundreds and thousands to spawn, one-third to one-half of the known Caribbean aggregation sites are now inactive. The Cayman Islands used to be home to five Nassau grouper (Epinephelus striatus) spawning sites. Today, four of these sites are dormant or depleted. But one site, on the west end of Little Cayman Island, is home to one of the last great reproductive populations of this endangered species.

Since 2002, REEF and the Cayman Islands Department of Environment have fielded research teams each winter to monitor and study the Nassau Grouper spawning aggregations in the Cayman Islands. While efforts are primarily focused on Little Cayman, work has also been done at the aggregations on Cayman Brac and Grand Cayman. The project has grown in scope to include an ambitious acoustic tagging research project, soundscape research, juvenile habitat and genetics studies, oceanographic research, and more. Click here to read more about the various research aspects.

Semmens et al. 2007. Charting a Course for Nassau Grouper Recovery in the Caribbean: What We’ve Learned and What We Still Need to Know. 60th Gulf and Caribbean Fisheries Institute Meeting Proceedings. More Details.

The Grouper Moon Project is a collaboration between REEF and the Cayman Islands Department of the Environment, with researchers with Scripps Institution of Oceanography and Oregon State University. Funding is provided by REEF members, and several foundations. Many volunteers and others have helped in the field through the years. Generous logistical support is provided every year by Caymanian businesses and locals. Visit the Supporters webpage to see a full list.