The M/V Wellwood, a 122-meter Cypriot-registered freighter, ran aground on August 4, 1984, on Molasses Reef off Key Largo, Florida. The ship impacted the reef’s upper fore reef and remained aground for 12 days. The grounding destroyed 1,285 square meters of living corals and injured 644 square meters of coral reef framework. In an effort to restore habitat structure and stability to the grounding site, restoration began in May 2002 (to find out more, visit NOAA's Wellwood Webpage). REEF was contracted by the National Marine Sanctuary Program to document recruitment of fishes onto the site as well as the subsequent changes, if any, to surrounding reefs sites.

REEF’s Advanced Assessment Team and Staff are conducting the monitoring. Both Roving Diver surveys and belt transect surveys are being conducted at the Wellwood restoration site and 2 adjacent natural reef sites. The 5-year project will provide temporal documentation of fish composition changes over time. The value of the information collected during this project will specifically aid in the assessment of restoration sites as effective replacements for natural habitat. 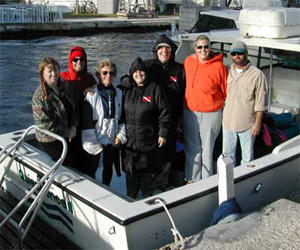 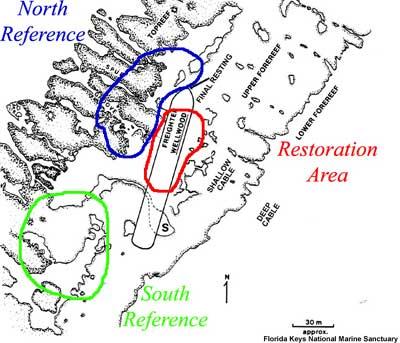 The team visited the three sites 7 times during Year 1, once in May 2002 prior to the installation of the restoration modules, monthly for 3 months after the restoration was complete (August, September, October 2002), and then quarterly (January, April, and July 2003). A total of 267 RDT surveys and 246 belt transects were conducted.
REEF Year One Wellwood Restoration Project Fish Monitoring Report (PDF)

- Average species richness per monitoring event was 84 at the Restoration Site, 116 at the North Reference and 124 at the South Reference.

- Overall density and biomass recorded during visual transects were lower at the Restoration Site than at either reference site due to the very low numbers of snapper and grunt present; density, biomass, and size of herbivores (parrotfish and surgeonfish) were similar at restoration and reference sites.

- After an initial colonization by fishes, the fish assemblage diversity, density and biomass present at the Restoration site have leveled off and remain lower than that found at nearby reference areas.

- Parrotfish and surgeonfish appear to be responding the quickest to the restoration efforts, with densities and biomass values similar to that of the reference sites.

- The relatively short duration of this study makes it difficult for results to be teased out from natural population variability.  Similarly, definitive conclusions cannot be achieved from these data due to the limited amount of time that has passed since restoration and the well-known decadal processes that are required for coral reef development.  However, these data will serve as a critical baseline for assessing future changes and the effect of any future restoration efforts at the site. 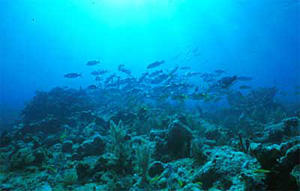 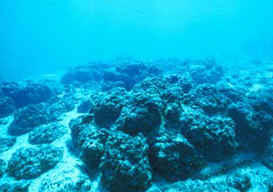