Organizers of the Second Annual Lionfish Derby held in Green Turtle Cay, June 19 reported that 941 lionfish were captured in the event held this week-end at the Green Turtle Club.

Twenty-one boats participated, with teams from Florida and the Bahamas searching the Abaco waters for lionfish in perfect weather and conditions.

First Place was taken by Thomas Sawyer, Gavin Roberts and Colby Cross in the Team, White Roach, who came in with a whopping 345 fish.  Second Place, with 245 fish, went to MJ Lowe, Tyler Survance and Kai Survance, in the boat, Goofin Off, and third place, with 95 lionfish, went to Dale Sawyer’s team on Cajun Bahamas.

First, Second and Third place for the largest lionfish were all awarded to Team Meander, from Jacksonville, Florida.  Nate Carney, who captured the largest lionfish ever recorded in the Abacos, just 2cm short of a national record, told Derby organizers that he found a hole outside the main barrier reef off of No Name Cay in 45 feet of water that was full of very large lionfish.  He used scuba and a pole spear to bag the winning fish, which was 43.4 cm in length (roughly 19 inches long) and weighing approximately 4 pounds.

Derby organizers, Bobbie Lindsay, from Palm Beach, and Lad Akins, from REEF, in Key Largo, FL said the overall numbers were lower than last year partially because of the local impact from the very successful Derby held here last June, which yielded over 1,400 fish.   “Awareness is much higher than last year, and Bahamians and visitors alike are spearing lionfish whenever they see them.  Consequently, there don’t seem to be as many lionfish in shallow water,” said Akins.

Nick Raich, from West Palm Beach, whose team was the high scoring American boat two years running, said,  “We hunt around Coopers Town, Spanish Cay and the surrounding area, and this year, we didn’t find as many lionfish.  But, we still had a great time.”

As in the first Derby, fish were filleted and cooked on site behind the scoring station by The Green Turtle Club, giving observers and participants an opportunity to sample this delicious fish.  This year, Tropic Seafood Limited, of Nassau, arranged to purchase the larger fillets of lionfish for $6.00 per pound.   According to Derby organizer, Lindsay, “Tropic’s offer to purchase Lionfish is an exciting development, because creating a market for lionfish is the best way to control the population of this invasive fish.  This has always been one of our main objectives.”

Over $5,000 in cash was awarded to the winning teams for the most, biggest and smallest lionfish.  Co-sponsors, Green Turtle Club, and Brendal’s Dive Center, were busy with Derby participants and both welcomed the full hotel and marina with special discounts for Derby contestants, their friends and families.  Next year’s Derby is set for June 24-25, 2011.  For full results and pictures go to www.lionfishderby.com. 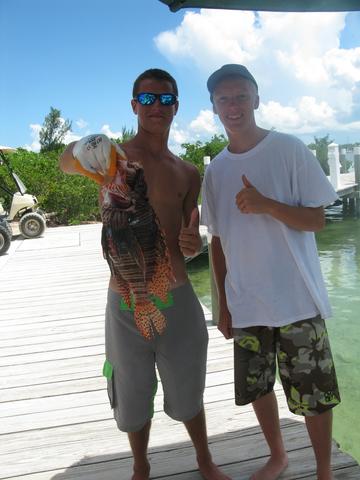