REEF is working in close partnership with the Florida Keys National Marine Sanctuary (FKNMS) to diligently track lionfish reports and initiate removal efforts in South Florida. The first confirmed lionfish in the Florida Keys was reported and captured within 24 hours in January 2009 (see previous enews article). Subsequent early reports in March-June were met with successful rapid response. However, beginning in July, reports began to increase beyond the capacity and range of available trained responders. To help combat the growing problem, REEF introduced over 100 on-the-water professionals to the latest lionfish information and collecting and handling techniques during workshops held in Key Largo, Marathon and Key West earlier this Fall. The workshops were funded by the NOAA Aquatic Invasive Species Program.

Because most Florida Keys reefs are managed under the guidance of the FKNMS and some of the most visited sites are no-take Sanctuary Protected Areas, special protocols and permits were developed to allow removal of lionfish in safe, effective and environmentally considerate manners. The goal of the program is to continue to track sightings and remove lionfish as soon as they are sighted to minimize impacts on key reef areas. Successful control of invasive lionfish requires adaptive management to include involving the general public and REEF is proud to be a part of this effort. With a large corps of dive professionals trained and additional workshops planned for early next year, the Keys are working to stay ahead of the invasion through early detection and rapid response. To report a lionfish sighting, visit REEF's Exotic Species Sighting Form -- http://www.reef.org/programs/exotic/report For more information on the program or to join in future workshops, contact Lad Akins at Lad@reef.org or call REEF HQ at (305) 852-0030. 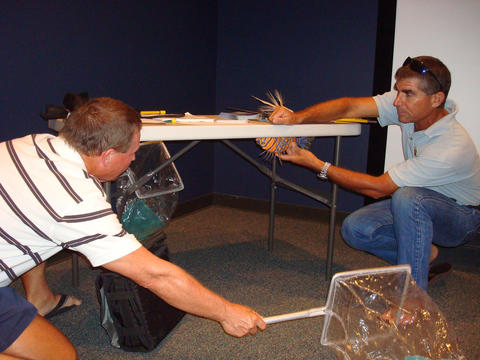