REEF Fest Home
Come learn about the amazing marine environment and the drastic changes that threaten our oceans! All seminars are free, but pre-registration is requested. Please check back here as we continue to update the schedule.

Seminars will be hosted at the Murray Nelson Government Center on September 20 - 22. Please see the detailed schedule below:

The endangered Goliath Grouper can weigh more than 800 lbs. and gathers in large spawning aggregations off the coast of South Florida annually. Dr. Koenig will present research on the recovery of the endangered (IUCN) Atlantic Goliath Grouper (Epinephelus itajara) in the southeastern U.S. In addition, Dr. Koenig will share how REEF data has helped evaluate and track the recovery of the species since 1990 and in documenting spawning aggregations at specific times and locations off Southeast Florida. Should a fishery be opened for this species, or should it continue to receive full protection similar to protections afforded to marine turtles and other endangered species?

Following his Bachelor and Master of Science degrees at Florida Atlantic University, Chris Koenig received his Ph.D. in Biology in 1975 at Florida State University. Since then, Dr. Koenig has authored or co-authored over 50 peer-reviewed science articles and contributed to the book, "The Rivers of Florida", edited by R.J. Livingston. His recent research focuses on the conservation of exploited marine species, their habitat, and preservation of biodiversity. Koenig's research on the biology of protected reef fish species has been important in the protection of such critically endangered species (IUCN designation) as Atlantic Goliath Grouper, Warsaw Grouper, and Speckled Hind. Koenig is presently engaged in a continuing study of Goliath Grouper reproduction, habitat, food and feeding, and age structure. He also advises on the management of Goliath Grouper in the southeastern U.S.

Diving in the Florida Keys: A fishy experience

Come learn what makes the Florida Keys such a unique and divers place to dive! Local experts Carlos and Allison Estape will share tips on where to see 100 or more fish species on a single dive, with a special emphasis on uncommon fish species found in the Keys. They will also discuss their findings from several years spent surveying Alligator Reef in Islamorada, and provide insight on how Hurricane Irma has affected the marine environments of the Florida Keys.

Carlos and Allison Estape are residents of Islamorada, Florida and previous REEF Volunteers of the Year. They teach many REEF Fishinars and a free monthly fish identification class at REEF Headquarters. They are also published underwater photographers, creators of the 100fishid.com website, and published authors of "The Fishes of Alligator Reef and Environs". The are REEF level 5 TWA Fish ID Experts with over 450 surveys, members of the Advanced Assessment Team, and proud supporters of the REEF Marine Conservation Internship Program. 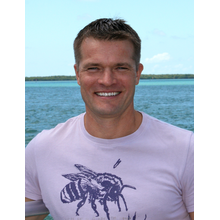 In the wake of an environmental disaster - is there a silver lining?

Dr. Martin Grosell will discuss the impacts of the largest marine oil spill in US history, the Deepwater Horizon spill in 2010. Extensive research efforts since 2010 have not only characterized the damage to the biology in the Gulf of Mexico but have also taught the scientific community about first response strategies for future oil spills and have provided extensive information about the Gulf of Mexico ecosystem. The Gulf of Mexico is the spawning grounds for many ocean fish species including tunas, billfishes and mahi-mahi of high economic and ecological importance. Our work to quantify impact of the oil spill has provided a wealth of new baseline information about the life of these majestic top predators and the role they play in open oceans.

Dr. Grosell is a professor of ichthyology with specialty in envrionmental physiology and toxicology at the University of Miami's Rosenstiel School of Marine and Atmospheric Sciences. Dr. Grosell obtained his MSc and PhD from the University of Copenhagen, Denmark, at the August Krogh Institute. He heads the Grosell Envrionmental Physiology and Toxicology Lab with a goal to study salt, water, and acid-base balance in fish and to assess the impacts of environmental stressors, both natural and anthropogenic, on these important physiological processes. Grosell has published ~200 peer-reviewed papers, books, and book chapters on the physiology and mechanistic toxicology of aquatic organisms.

Forty years ago, Caribbean reefs were dominated by dense  thickets of elkhorn coral, spurs were constructed of large mounds of century-old mountainous star coral colonies, stands of staghorn were found at the bases of spurs, extending as far as the eye could see, and foliaceous lettuce coral formed overlapping shingles in deep water. Numerous catastrophic events, such as mass bleaching, disease outbreaks, hurricanes, and other disturbances caused declines in reef building corals, and today most reefs have less than 10-15% living coral cover. In response to the ongoing crisis, resource managers, conservation groups and scientists are implementing new strategies and programs to address losses and begin rebuilding these precious ecosystems. Some say it's too late, as climate-change-related stressors such as elevated water temperature, increased storm frequency and ocean acidification are affecting even remote Caribbean reefs removed from direct human activity. While coral reef managers can do little to abate climate change, there are successful local strategies that can enhance the resilience of these reefs to climate change, and can restore the corals that were lost. Your advocacy for protection and involvement in conservation actions is a key step to reverse the decline and ensure the persistence of reefs far into the future. 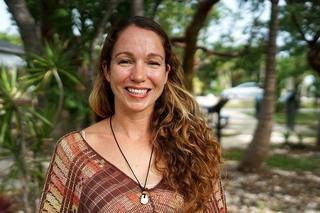 2018 marks the tenth year that the Reef Environmental Education Foundation (REEF) has organized lionfish derbies to help combat the impacts and promote awareness of this invasive species. During this time, REEF's 42 organized derbies and 40 REEF sanctioned derbies have captured over 43,000 lionfish from more than 2,500 participants. Dr. Candelmo will discuss local trends of these events including: public participation, catch per unit effort, and size distribution of lionfish. As the invasion progresses and the lionfish population adapts and responds to fishing pressure, research efforts should focus on obtaining information that will have tangible impacts in advancing management strategies and improving these community efforts. New alternative fishing methods including lionfish traps and fish aggregating devices are being tested to supplement removal efforts and target deeper habitats. In addition, further research into the predictability of lionfish movement patterns utilizing surveys and acoustic technology can help improve catch across the invaded range. Finally, are native predators beginning to play a role in controlling lionfish populations? And should lionfish management efforts begin to focus more funds and energy on improved conservation efforts for these ecologically valuable native species?

Dr. Candelmo is REEF's Invasive Species Program Coordinator. Alli joined the REEF team in 2018 and brings a wealth of experience to the organization. She attended Rutgers University where she obtained a Ph.D. in Ecology and Evolution. She has studied the population dynamics and management strategies of invasive lionfish in the Cayman Islands and Turks and Caivos, working with the local stakeholders and communities on both islands to help improve removal efforts and gain a better understanding of invasive lionfish. Her doctoral and postdoctoral research has examined a number of anthropogenic impacts on coastal ecosystems and early life history finfish, including: toxicants, ocean acidification and increased temperatures. She had the opportunity to collaborate with REEF on the Grouper Moon project in 2016 and 2017 examining survivorship of early life stages of Nassau and Tiger Grouper. Alli also has experience developing hands-on science activities. She is a strong advocate for conservation of coastal and marine ecosystems, regularly volunteering for local community programs. 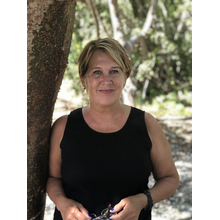 Fish Behavior and Beyond: Conservation and Connections

Fish behavior and brains tell us something about our own evolution. Fish connections to other species, both in water and on land, show the fascinating and ecologically important connections between species. Dr. Shumway will discuss her own research on the evolution of complex brains and behaviors in fish, and how fish brains evolve with increasing habitat or social complexity. She will also share numerous tales of fish connections that just may surprise you!

Dr. Shumway is the new Executive Director of REEF. Caroly joined REEF in August, 2018, and has had lifelong passion connecting people to nature. She was inspired to pursue conservation following her graduate work on electric fish in the rainforest streams of Panama. A third-generation oceanographer and fish geek, she has 26 years of government, nonprofit, and academic experience in marine and freshwater conservation, research, policy, and outreach in the U.S., Asia, and Africa. Caroly has led fish biodiversity surveys along the Congo River, and dived in Lake Tanganyika to explore fish habitat and behavior. Caroly was Chair of the Science and Data Working Group for the Atlantic Coastal Fish Habitat Partnership for 5 years, and is author/co-author of 30 publications. She holds a Ph.D. in marine biology from Scripps Institution of Oceanography. 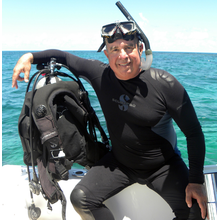 Stressed Out: Three Decades of Nitrogen Enrichment on Coral Reefs of the Florida Keys and Caribbean Region

Coral reefs in the Florida Keys and wider Caribbean region have experienced dramatic ecosystem change over the past three decades. Coral bleaching, disease and die-off, combined with expansion of benthic algae and sponges, have transformed reefs in many parts of the Caribbean, especially those adjacent to increasing human activities. Long term water quality monitoring at Looe Key reef in the lower Florida Keys since 1984 showed significant increases in reactive nitrogen and chlorophyll in the 1990s following increased runoff from the Everglades into the Gulf of Mexico and Florida Bay.  This data also revealed how periods following increased flows of nitrogen-rich water from the Everglades were followed by three mass bleaching events in 1987, 1997, 2014. Similar replacement of corals with benthic algae has occured in Discovery Bay, Jamaica, over the past three decades. These case studies illustrate how nitrogen-fueled marine eutrophication is inter-linked to loss of biodiversity on coral reefs along developing coastlines in the wider Caribbean region.

Dr. Brian E. Lapointe is internationally renowned for his research on water quality in tropical and subtropical seagrass and coral reef ecosystems. Brian obtained a BS in Biology from Boston University, a MS in Evironmental Science from the University of Florida, and a Ph.D. in Biology from the University of South Florida. He has worked at Woods Hole Oceanographic Institution, Skidaway Institute of Oceanography, and is currently a Research Professor in the Marine Ecosystem Health Program at the Harbor Branch Oceanographic Institute (HBOI) at Florida Atlantic University (FAU) in Ft. Pierce, FL. Since 1974, Dr. Lapointe has assessed nutrient pollution and harmful algal blooms in coastal waters of South Florida and the Caribbean region. Although his current work focuses on the declining health of the Indian River Lagoon and the Sargassum influx to the Caribbean region, he has led numerous research expeditions throughout the Caribbean. Dr. Lapointe pioneered the use of stable nitrogen isotopes in algae to 'fingerprint' landbased nitrogen sources and established the longest low-level nutrient record for a coral reef anywhere in the world at Looe Key reef in the lower Florida Keys. He has published peer-reviewed scientific papers and received numerous awards for his work.