We Need Your Sightings!

Have you seen or captured an exotic or invasive species? Help REEF and USGS track the invasion by submitting a report.  Use this form to submit details about any non-native marine species seen while diving or snorkeling.

Join this program and host your own successful lionfish derby with our help.

Attend a lionfish workshop and removal dive to learn about the invasion, safe collecting and handling techniques, and to obtain collection permits for the FKNMS SPAs.

REEF Lionfish Jewelry Workshops create a market to promote lionfish removal from our coral reefs. Through participation in this workshop, you are helping to keep our oceans healthy, vibrant and lionfish free!

What is the Problem?

The threat of exotic and invasive species to aquatic environments has gained attention in the media through cases such as the zebra mussel and lamprey in the Great Lakes and Caulerpa taxifolia algae (AKA the killer algae) in California. Incidences of exotic marine fish species have not been widely reported until recently. REEF reported on the Indo-Pacific Batfish that were repeatedly sighted in the Florida Keys and ultimately removed as a result of a team effort between REEF, the Florida Keys National Marine Sanctuary, the New England Aquarium, and local marine life collectors. And now, sightings of lionfish off the Eastern US coast populations an everyday occurrence.

Recreational divers and snorkelers are a valuable source of information for tracking exotic fish species because they are looking, taking notice of rare things and often know what doesn't belong. REEF takes an role acting as a clearinghouse of information. To this end, we are asking our surveying members to report all exotic fish species that they encounter. Sightings data will then be used to track exotic species introductions, document populations that appear to be spreading, and serve as an early warning system to hopefully prevent harmful impacts to the native ecosystem.

What is an Exotic or Invasive Species?

A manuscript summarizing sightings reported through 2002 to REEF's Exotic Species Sighting Program was published in the journal Marine Ecology Progress Series. The data show a hot-spot of non-native marine fishes along south Florida (Broward and Palm Beach Counties) and the authors believe that intentional (and unintentional) releases from aquaria are the source of these non-natives. Click here to read the paper.

Sightings from the REEF Program have been included in the US Geological Survey Nonindigenous Aquatic Species database. Lionfish sightings data, submitted to REEF and collected during REEF lionfish research expeditions, have also been included in a range map generated by the USGS.

How can you help?

If you are conducting a REEF survey and encounter an exotic species, please report the species as a write in species on the back of the scansheet. Whenever possible, please include an extra sheet of paper with extended details about habitat the fish was in, behaviors noted, other species it was hanging out with, and approximate size. Also indicate if you have photo/video of the fish.

If you see an exotic fish species when you are not surveying, please use our online sightings form to submit your information.

As part of the REEF Invertebrate and Algae Monitoring Programs in the Pacific Region (Pacific Northwest and California), three invasive tunicates and an invasive algae are being monitored.

Since 1996, members of REEF have been proactively increasing awareness and engaging in removals of non-native species before they can become established and cause problems in Florida’s coastal waters.  Removals in 1999 and 2002 of four large Indo-Pacific batfish (Platax orbicularis) from Molasses Reef in Key Largo set the stage for an invasive species outreach and control campaign, followed by the removal of a whitetail dascyllus damselfish (Dascyllus aruanus) from the east side of the Blue Heron Bridge in 2009. The removal of the mimic lemon peel surgeonfish, the first record of this fish in Florida waters, occurred on the west end of the bridge.  A humpback grouper (Chromileptes altivelis) was also removed by a local spearfisherman from a reef off Biscayne National Park in 2012.

More than 37 species of non-native marine fish have been documented in Florida coastal waters, most believed to be released aquarium pets. Invasive lionfish, first sighted in Florida in 1985, are the only one of these species to have become established and are now causing severe problems throughout the western Atlantic, Caribbean and Gulf of Mexico.  “Prevention is the best case scenario” says REEF’s Director of Special Projects, Lad Akins, “but barring that, early detection and rapid response are key to preventing another lionfish-like invasion”.

USGS and REEF coordinate the removals and whenever possible the non-native fish are collected alive in partnership with Frost Science and displayed at public aquaria for educational purposes. Frost Science has a dedicated exhibit to exotic and invasive marine species including a Blotched Foxface captured from Dania Beach in late 2016.

If you spot this fish or any other non-native or invasive aquatic species, please report the sighting to the USGS’ Nonindigenous Aquatic Species database.

Scientists acknowledge the importance of early detection and rapid response in part because of lessons learned from the lionfish, a destructive marine invader, which was first reported off of South Florida in 1985. It soon invaded the Atlantic coast of the United States, Caribbean and Gulf of Mexico, with unprecedented, alarming speed.

“No one saw the lionfish invasion coming, and we definitely don’t want to be surprised like that again,” said USGS Fish Biologist Pam Schofield. “Our research with lionfish shows that it is vitally important to remove non-native marine fishes as soon as we see them – before they have the chance to build up a population and spread like lionfish have done.”

Akins, who has been involved in all of the previous pre-emptive removals heads the organization’s exotic species programs and sits on the Gulf and South Atlantic Aquatic Invasive Species Panel. “Once a species becomes established and is reproducing, it is almost impossible to control.  A penny of prevention is worth millions of dollars in dealing with invasions once they gain a foothold.”

Lionfish Invasion. Why is this an issue?

Lionfish are:
1) Voracious predators being shown to eat native fish and crustaceans in large quantities, including both ecologically and economically important species like grunts, snapper, nassau grouper, and cleaner shrimp
2) Not known to have any native predators
3) Equipped with venomous dorsal, ventral and anal spines, which deter predators and can cause painful wounds to humans
4) Capable of reproducing year-round with unique reproduction mechanisms not commonly found in native fishes (females can reproduce every 2-4 days!)
5) Relatively resistant to parasites, giving them another advantage over native species
6) Fast in their growth, able to outgrow native species with whom they compete for food and space

Non-native marine fishes can pose a major threat to marine fisheries, habitats, and eco-system function.  Increased reports of non-native species and the successful invasion of lionfish in Atlantic waters have proven the need for early warning and rapid response to confirmed sightings.  The Reef Environmental Education Foundation (REEF), has been working with Federal, State, and local partners as well as divers and dive operators, public aquaria, and foreign fisheries departments to enact rapid response protocol and removals and to assist with scientific investigations related to non-native marine species.

Indo-pacific Red Lionfish (Pterois volitans) have been documented along the entire US East Coast from Florida through Massachusetts, east to Bermuda and south throughout the Caribbean. The expansion has been extremely rapid and exponential in scope.

What is REEF doing about it?

Since 1994, REEF has maintained an on-line educational section on non-native species as well as an on-line exotic species reporting page.  Divers are encouraged to submit any sightings of non-native species via this sightings reporting form.  Since 2006, REEF has been working in close partnership with government agencies and partners throughout the region to help develop lionfish response plans, train resource managers and dive operators in effective collecting and handling techniques and conduct cutting edge research to help address the invasion.  To aid in this effort, REEF currently enlists interested divers and snorkelers to join organized lionfish research and removal projects and encourages public participation in helping address the invasion.

How you can help: 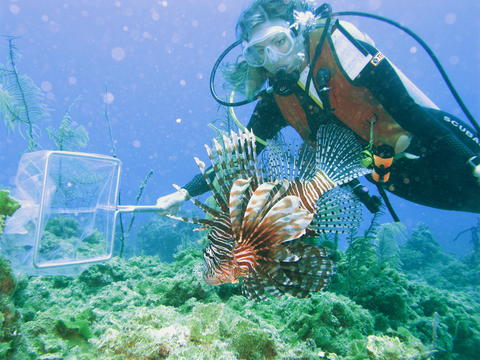 The Lionfish studies have been part of a collaborative program between REEF and several partners, including:

Generous logistical support has also been provided by Bruce Purdy, Stuart Cove's Dive Bahamas, and David and Trish Ferguson. Dozens of REEF volunteers have donated their time to assist with field research.